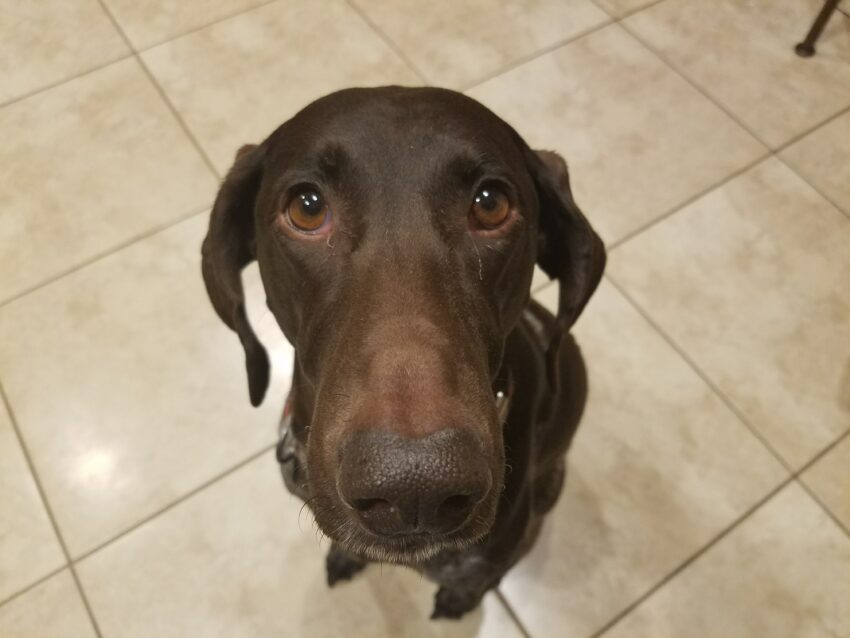 I remember the day I picked her up. A dear friend and colleague had approached me about adopting her brother’s dog. A purebred German Shorthaired Pointer (GSP) named Raven. Her brother’s life circumstances had changed and he needed to get Raven into a good home. I agreed. Raven jumped in the truck and took her place on the front seat. On the ride home, she gazed out the window. Not excited, not nervous. Just… matter-of-fact.

Raven was weird. In a good way, but she had the oddest personality of any of the dogs I’ve owned over the years. She was playful, but on her terms. She was affectionate, but on her terms. Often, her demeanor was best described as “aloof”. Frequently, she perched on the back of the couch – all in all, Raven acted more like a cat than a dog.

We’ve always had 3-4 dogs. It just seems like a good number for our family, so we didn’t have to think too much about adopting Raven. After seeing some pictures my wife declared “I dunno, Marsh – I feel some sort of connection with that dog already”. Little did she know…

When Raven played, she had no “inside voice”. She was loud and aggressive and truly – made it sound like something was about to get eaten. Raven insisted not only on sleeping in our bed at night, but at some point, every night – burrowing under the sheets. Rarely a night went by that Karole wasn’t hollering at Raven for pulling all of the sheets off of her. That’s just how it went. Raven loved walks, and bounced straight up and down the whole time – literally like a pogo stick. It didn’t matter what kind of leash or harness we tried, Raven would boing up and down along the sidewalk – often to the delight of others out for a walk in the neighborhood. Raven loved people, and would always make friends and win hearts at every single opportunity. Few people couldn’t fall victim to “Raven love”.

I recall one day Raven’s original owner called me. “Hey Marshall – is Raven OK? I just got called from a Vet in Mesa and he said he had her.” “Well”, I said, Let me see and I will get back to you”. So I called home and my daughter answered. I said, “Hey – where’s Raven?’ My daughter replied “Right here”. “Are you sure?” I asked. “Yeah” was the response. My daughter, like most teenagers, sounded a bit disinterested. “Mikaela – I want you to look at Raven right now, and tell me what she’s doing”. Big sigh. “OK. … Dad? I’ll call you back!” As it turned out, she had left the back gate open and Raven wandered out. Her rescuer said he pulled over to check on her and she jumped into his car. That was Raven.

Eventually Raven became diabetic, with all of the trials and tribulations that come with diabetes. Not long after her diagnosis, she was fully blind. Not that it really slowed her down. Other than insulin shots and diet restrictions, Raven was still Raven. She always had to be next to my wife or I. I literally have never sat on our couch, when Raven didn’t climb on top of me – her preferred display of affection I guess. She was a consummate beggar, driving us all crazy every meal time – moaning and crying like she was starving. In between meals she begged all day for treats. If you didn’t know her, you would think that we never fed her. Never have I owned a more food-obsessed dog. But that was Raven.

About a month ago, Raven and Chloe (our Shepherd-Rottweiler mix) got into a fight, which was very rare. Raven got scuffed up pretty good but most notable was a tear at the tip of her ear, approximately 1 cm in length. It was hard to stop it from bleeding, and hard to bandage. A week later her ear was a mess; bad enough that the Vet said we needed to amputate part of her ear. This went well, actually. Raven did not like bandages or cones and in spite of 10 days of near-constant struggles with flapping her ears and getting her bandages off, Raven came through it like a champ. Raven loved riding in the truck, and loved visiting the Vet’s office so I think all of those Vet visits were kind of fun for her. In spite of our worries and her other medical conditions, Raven weathered the storm, happy the whole time. She got her stitches out on Tuesday. Even the Vet seemed a little surprised at how well she healed. Again, we were out of the woods, so we thought. Things were about to take a very bad, very sudden turn..

On Thursday, Raven wouldn’t eat, and definitely wasn’t herself. By mid-morning she was vomiting. I couldn’t get away from work, so my daughter took her to the Vet. When they called, the news wasn’t good. The Vet suspected ketoacidosis, and Raven was extremely sick. My options were intensive (and very expensive) hospitalization, which still came with no guarantees; or try some anti-nausea medicine, give her some IV fluids and hope that she was able to eat some, so we could get insulin in her. The night was rough. She didn’t eat and by 5:00 AM had developed bloody diarrhea. For our dear Raven, the end was in sight. My heart was broken that even in her sickness and weakened state, she staggered outside, trying not to make a mess on the floor. That was Raven.

Dr. Burns concurred with our decision. We had arrived at the Vet around 8 AM, and by 9:00 I was on my way home. Raven, who a week ago had half an ear but was happy – had crossed over the Rainbow Bridge. The suddenness of it all left my family stunned and heartbroken. Now, three days later, we see what a presence Raven had in our house. Even old and slow, even with three other dogs in our fur-family. There is an emptiness now, that will take a long time for us to get used to. Thank you Raven, for joining our family. Thank you, for being you. We love you, and you will be missed.

Other than climbing in my lap, the only time I knew Raven loved me was whenever I arrived home. Blind as a bat, she still pushed through the crowd at the door to greet me, and followed me into the kitchen. Her stubby little tail was always going a mile a minute and she’s try to jump on me, nuzzle me or whatever. Regardless, my homecomings were always special. I think that is when I will miss her the most.

6 thoughts on “Saying Goodbye to Cat-Dog”