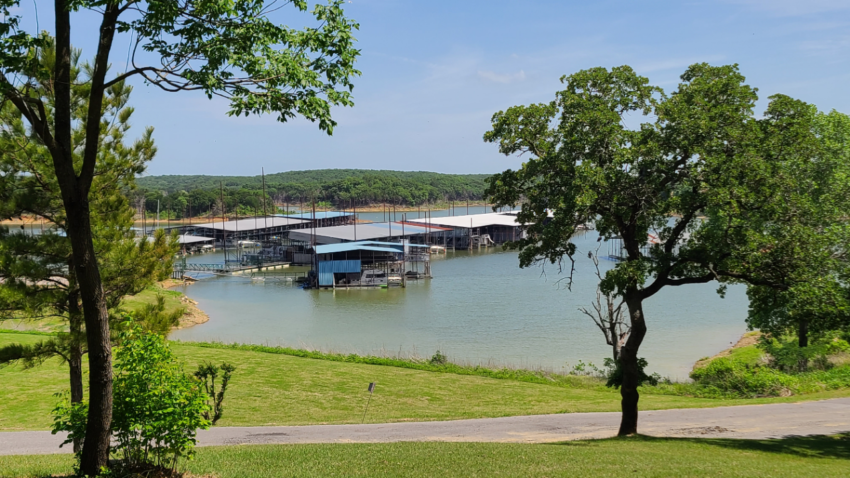 I’ve been chatting with Bill Carey over at Striper Express for well over a year, and every time I talked to him, I wanted to visit even more. Finally, I had an opportunity. Bill had generously donated a discounted “Big Fish Special” to the Arizona Mule Deer Organization for us to auction off at one of our fundraising banquets. Friend Robert Gomez and I won the small bidding war and the trip was now going to become a reality! After talking with Bill, he said May was the premiere month at Lake Texoma so we locked in a date and enlisted friends Mike and Kris to come along on the four-fisherman package. the Big Fish Special is for four anglers – two days of fishing and lodging included. We provide our own food, and the correct Texas fishing license for Lake Texoma; the rest is included.

Robert and I landed in Dallas after lunch, grabbed our rental and picked up Mike and Kris who had landed at the other airport (we all used air miles on our flights. Robert and I used American, Kris and Mike used Southwest). Pottsboro (our destination) is about a 90 minute drive from Dallas. We headed in that direction, stopped along the way for some Tex-Mex and were there by 3:00PM to get our cabin. Then we headed out to buy some groceries.

I wanted to talk about the cabins, which dont belong to the Striper Express outfit. First off, they are clean and functional. The staff was super-friendly. That being said, all of us felt that it wouldn’t take much to bump the accommodations into the next level. The porch was covered in spider webs and paper wasps were building nests in a few places. This wasn’t a day or two of neglect; I don’t think the porch had been swept or hosed down in awhile. To be clear, we are experienced outdoorsmen – not city folks unused to cabin living. We knew we had to buy our own food, but there were hardly any amenities in the cabin either. One garbage bag in each receptacle, no paper towel, skimpy on towels, soap and washcloths. No dishrags or scrubbies to wash dishes. Very few cooking utensils or knives or cutlery. The thing is, we didn’t mind buying those things, but anything left by prior parties was not saved for the next people either. Its a shame to buy tinfoil or dish sponges or coffee filters for a 2 day trip and have to throw away what you didn’t use. I’m not saying the cabins were bad at all; as stated, they were clean, the beds were comfy and they served their purpose. Just be prepared to buy more than food. Of course Bill has other lodging options, and you can order packages without lodging also.

Day One of fishing found us at the dock at 6 AM where we met “Little Dave”. We got loaded quickly and headed out. The boats are in great shape, and the tackle provided is well-used but well-tuned and rigs were ready to go. Striper Express is a bit unique in that they use artificial lures only, and these guides know their stuff. We had a ton of topwater action at our first spot, boated a bunch and off we went to another spot which was also productive. Then we went to another where we boated the big fish of the trip (9 pounds) and we all missed or broke off more big fish. It was fast and furious for about an hour. We then went to another spot where Dave switched us over to jig heads and paddle tails. We’d drift, relocate and drift again. By 8:30 we had our limits, plus a bunch of bonus sand (white) bass too. Back to the dock we went where Dave had our fish fileted and bagged in no time.

We had all brought collapsible rods so spent the rest of the day checking out the local sites, like Fink Liquor and Frank’s, and then fished into the evening. We caught carp, catfish, stripers, largemouth and sand bass by the docks and off of the beach.

That night we had a fish fry and honestly – some of the best fish any of us had eaten. Not sure if it was the batter we bought, the atmosphere, or what – but it was delicious.

Day Two we had a different guide because Lil Dave had been requested prior, by another party. If Dave was at the high-speed, “run n gun” end of the spectrum, Todd was at the other end. Todd was super friendly, methodical and also – very knowledgeable. Todd started us a different spot, with a different type of topwater lure, and holy moley! In my life I have never had fishing action like that. In a space of about 20-30 minutes we had 17 fish in the box, and a bunch more released and/or lost. Todd barely had a chance to sit down. Then, like the day before we moved to another spot and used paddle tails, when the topwater bite slowed down. Again, we limited out. It took a little longer but still we were back at the dock in around 4 hours, and to be fair, all of the guides were having a (slightly) slower day that day.

Bummed that Bill was out of town so we missed him. We did meet his son and co-owner Chris. Chris is a great guy and accomplished guide. He is booked out for months, a testament to his demeanor and ability to put clients on fish.

Striper Express has a bunch of different packages and can create something that fits your budget and needs exactly. At just over $400 each (for the Big Fish Special) we all felt this was a screamin deal and well worth it for lodging and two days of fishing. We are all definitely going back and we are also all looking at trying Bill’s Corporate Events. He has a prime setup for a cool and successful corporate retreat or team-building event. These include food, accommodations a weigh-in in a tournament atmosphere and topped off with t-shirts and prizes.

I’m not sure if Striper Express uses Sixgill products exclusively but most of the rods and reels I saw were Sixgill, and everything worked great! All in all, I can’t recommend Striper Express enough. Their motto is “We guarantee excitement!” and boy do they deliver! It was an awesome trip and we all can’t wait to get back!

One last shout out – we all couldn’t leave Texas without sampling some BBQ. We took a detour (and a chance) on the journey back to Dallas and stumbled across Magic Smoke. It was amazing. If you’re in the area, you’ve really got to try it. Highly recommended. Yummm